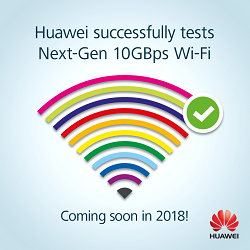 Huawei has successfully tested 10GBps Wi-Fi over the 5GHz band and predicts the technology could be commercially available from 2018.

The lab test was held in the Chinese vendor's headquarters in Shenzhen. The speeds are 10 times faster than those commercially available today.

The necessary standards for the technology should now be agreed upon to help speed up availability of the service, the company added.

The trial comes off the back of research that Huawei began in 2010 to look at new methods of Wi-Fi beyond wideband radio and baseband processing.

The vendor said it used the likes of MIMO-OFDA, intelligence spectrum allocation, interference coordination and hybrid access to produce the 10GBps Wi-Fi service.

A spokesperson commented: "As the demand for ultra-fast connectivity for smartphone applications continues to drive the need for higher data transmission rates, the next generation of Wi-Fi access will need to deliver a better user experience, especially in densely populated environments requiring high density deployment such as enterprise offices, airports, stadiums, shopping malls and coffee shops."

The group will work on developing standards for 10GBps technology ahead of Huawei's expected 2018 commercial launch.

According to figures from the Wireless Broadband Alliance, operators will continue to rely on Wi-Fi, with 10.5 million hotspots deployed by 2018, compared to the 5.2 million deployed in 2012.

By 2018, Wi-Fi offload will contribute to an additional fifth of mobile data capacity for networks.