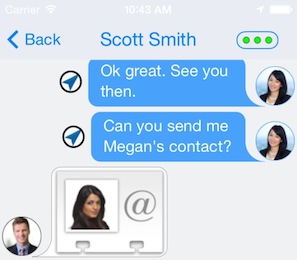 Silent Circle has "substantially rewritten" its iOS messaging app, offering the ability to send secure messages to those who do not use it.

The security company has abandoned Apple's CoreData development software for its Silent Text 2 app and replaced it with a homegrown version. The reason given for this is that the assumption that both parties are on the same security network is "generally not true", Silent Circle said.

It has replaced it with its own "Progressive Encryption technology" – a hybrid of different types of key agreement protocols that it has built. This allows users of the app to send protected messages to those who do not have it.

Silent Circle co-founder Vinnie Moscaritolo said: "This gave us amazing improvements in performance and reliability as well as substantially better anti-forensics on the data at rest. All the protocol security in the world won’t help you if your device is not well protected and so we treat that with the same amount of concern.

"Ideally you should be able to start sending secure messages without waiting for the recipient to respond, but without sacrificing the same level of security and end to end encryption provided by the key exchange that we employ our current product."

Among the other features brought to the app are a split screen feature for the iPad, a secure contacts book, the ability to queue messages to send at a later time and return receipts for messages.

The company said it is planning to introduce further tweaks to the app, including secure group conversations and an improved cloud storage service.

Earlier this year, the company teamed up with Geeksphone to produce the Blackphone, which promised a completely secure experience for consumers.