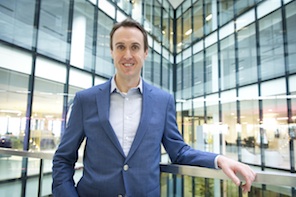 Axonix was unveiled this morning with the company expected to start trading within the next four weeks. MobClix was rescued from the collapse of its former owner Velti by Telefónica and GSO Capital last year.

The company had been trading for four years so Simon Birkenhead, the former Telefónica Director of Global Advertising Sales who has been parachuted in as Axonia CEO, said Axonia will trade with legacy MobClix companies.

He said: "While it's a brand new company, it's absolutely not a start-up product. It has a four year heritage and was market leading."

Axonix provides an SDK or code that can be placed into a website or app. When this app is rendered, there's an ad space to be sold. Once the app is accessed, Axonix holds a live auction for the ad space, which is bid upon by a range of mobile advertising companies.

The process is fully automated and takes around one hundredth of a second, so a consumer treats the recently sold advert as always being on its screen.

Research from eMarketer predicts that real-time bidding (RTB) will account for 54 percent of all total US display ad spend in 2017, with mobile-based RTB sales, in particular, accounting for approximately 20 percent of this spend.

Birkenhead said because of the relationship between Axonix and more than 100 legacy companies MobClix dealt with, there is no need for some mobile advertising companies to install new software to take part in auctions.

According to the CEO, Axonix’s key differentiator was it was specifically built for mobile devices: "It's not a platform that needs to be retrofitted," he said.

Once the company begins trading, Birkenhead said one of the key priorities for the months ahead was to begin refining the MobClix platform.

He said: "One of the strategic reasons we bought the company is the opportunity to layer on [Telefonica's] data onto MobClix's platform. We will work on taking the consumer data from the likes of Germany and Brazil and integrating that to enrich the targeting for advertisers."

While this data would only be specific for regions that the operator trades in, Birkenhead said Axonix will be able to use other data sets as well.

He refused to discuss how much both companies paid for MobClix but said it was far smaller than the €253 million Twitter paid for MoPub last year, which performs a similar function.

Stephen Shurrock, CEO of Digital Service & Innovation at Telefónica, commented: "Our immediate priority now is to scale the business quickly by attracting the best talent in the industry, right from the heart of London, and partner with leading brands, agencies, networks and publishers to make highly targeted, relevant and impactful mobile advertising a reality across the globe."