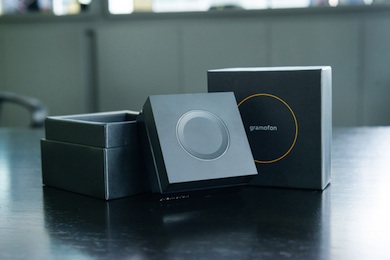 The company behind the Fon Wi-Fi network is trying to raise $250,000 (€181,000) to build a wireless jukebox controlled by smartphones.

Fon has partnered with Facebook and Spotify on the Gramofon Kickstarter project. People can stream music from Spotify through the Gramofon to sound speakers of their choice via a wireless network.

The Gramofon also acts as a Wi-Fi hotspot in millions of places worldwide, with users being able to connect to the hotspot through their Facebook account, rather than a password.

Further, Fon said the box can be used as a primary Wi-Fi router. For example, a Gramofon's owner's friends can also play music through the box by connecting on Facebook.

The first devices should ship in July, assuming Fon meets its Kickstarter total.

The Gramofon was originally built using open source hardware and software like Raspberry Pi. The project began in earnest a year ago with a team of engineers based in Spain working on the product. It rebuilt the Gramofon using a Qualcomm Atheros AR9341 chip.

The device is a more affordable version of high-end connected stereos made by the likes of Sonos. Fon said it hopes to add streaming services from the likes of Grooveshark, Soundcloud, Google Play and Amazon in the future.

Fon currently partners operators including Deutsche Telekom, Belgacom, BT and KPN by providing its Wi-Fi network to customers. Belgacom customers, for example, have access to 700,000 free Wi-Fi hotspots provided by the company.