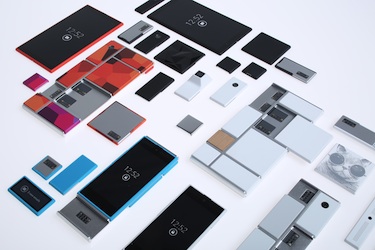 Google is looking to use electropermanent magnets to hold together its forthcoming Project Ara modular smartphones, the digital company has announced ahead of a developers conference this month.

The news came as Google teased details of its new handsets, which will allow users to click parts of the smartphone, such as a camera, a screen and processor, into its endoskeleton. The magnets will hold the parts of the phone in place.

A new video posted by the company suggests there will be three sizes of Ara smartphones available, a phablet device, conventional smartphone and a ‘nano” device.

Google will hold the first of three developers conferences in 2014 on 15 and 16 April in its California headquarters and online. A module developer kit is expected to be launched online imminently. The kit will use a prototype version of the Ara on-device network, which will use a more basic version of the MIPI UniPro protocol implemented on a field-programmable gate array and running on a low-voltage differential signaling physical layer. Further versions of the MDK will use the higher spec ASIC implementation of UniPro and will run on a capacitive physical layer.

Project Ara had formerly sat as part of Google’s Motorola Mobility handset arm, under its advanced technologies and projects team. Google sold Motorola to Lenovo for €2.1 billion in January, although Project Ara was not part of the deal.

The forthcoming modular handsets are set for a commercial launch in early 2015. Google also partners with manufacturers to produce its Nexus range of Android smartphones and tablets.