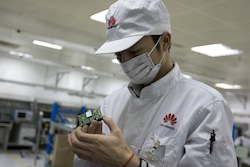 Huawei has implemented its SingleRAN technology in Valencia as part of Orange's first trials of LTE-Advanced in the city.

Both companies have combined 20MHz from Orange's 2.6MHz band with 10MHz from the 1.8GHz band. During the trials, Orange and Huawei have hit speeds of 222MBps, which they said is just outside the maximum theoretical speed of 225MBps that can be downloaded on the bandwidth. In using the SingleRAN technology, Orange has been able to provide 2G, 3G, LTE and LTE Advanced without having to replace its hardware.

Both companies are planning to install another six nodes across Valencia to test the technology across a small network. Orange launched 4G into Valencia last July, spending €17m to update access and transmission networks. It now covers the whole Valencia metropolitan area with 4G.

Last month, Orange got permission from the French regulator to carry out LTE-Advanced trials in densely populated areas of Bordeaux. Bouygues will roll out LTE-A to Bordeaux and Lyon from the summer and SFR is testing the technology in Marseille.

LTE-Advanced trials and roll out are accelerating globally with ABI Research predicting subscriptions will hit half a billion by 2018. However, Europe will lag behind other markets with only 55 million subscribers, compared to 220 million in North America and 159 million in Asia-Pacific.

According to the latest figures from the Global mobile Suppliers Association, operators in more than 25 countries have launched LTE-Advanced networks that are compatible with Category 4 devices that can hit download speeds of 150MBps.