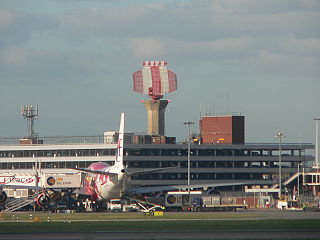 Ofcom has announced that the four operators likely to win 800MHz spectrum have agreed to form a joint company to speed up clearance of TV channels in the 800MHz frequency bands, but deployments in 2.6GHz also face their own spectrum challenge - rickety airport radars.

The problem is that many airport radars used by air traffic control (ATC) at civil and military airports are quite old - especially at the main London gateways. They are supposed to operate in the 2.7GHz band, but in fact many of them can "hear" signals down as low as 2.4GHz. That means that LTE signals at 2.6GHz could interfere with ATC radars, which is clearly not a great situation.

The answer is to put filters onto the airport radios to make them operate only in the 2.7GHz band. In the meantime, there are likely to be exclusion zones for LTE 2.6GHz around airports, especially the older London airports. That means that a major part of West London, not to mention the affected airports themselves, will not be able to have 2.6GHz LTE until the operators are given the all clear. In a dense environment like an airport, or urban and suburban West London, the higher capacities offered by 2.6GHz LTE are likely to be more desirable than 800MHz. London and the South East is also likely to be where operators will want to start rolling out LTE.

Dr H Nwana, Director of Spectrum Policy at Ofcom, acknowledged as much when he told Mobile Europe in May 2012:

"We've been clear - the earliest we can clear spectrum around London and the South East is October 2013 - and that's where the operators are likely to start rolling out their networks. That's not guiding our timetable, but every time someone throws rocks at me, I also point out that they would not be able to use that spectrum for quite a while anyway."

October 2013 wasn't a problem as long as it looked likely that the 800MHz schedule was likely to proceed in step (and as long as EE didn't mug the market with 1800 LTE a full year earlier). But now, with the operators committing to getting recalcitrant analogue TV channels available as soon as possible, Ofcom has said that it sees most of the UK's major cities having 800MHz LTE bands up and running through May, June and July next year.

That meant that the airport radar issue became more pressing, especially as EE, and likely Three UK, will not be as affected as they will both have 1800MHz spectrum to work with. Bringing forward 800MHz clearance was a key issue in reducing EE's head start on LTE and Ofcom would not be keen to see the non-1800 operators inconvenienced further.

Ofcom has taken note, though. A letter from Ed Richards to Maria Miller sent on 1 October said that Ofcom thinks it might be able to bring airport clearance forward by a quarter - but only if the MoD and others can get a move on. His letter said:

We have identified a potential rephasing of the civil and military radar modification plan that might allow 4G base stations using frequencies in the 2.6GHz band to operate in London from no later than the end of Q2 2013, some three months earlier than the current plans would otherwise allow.
In other words, Ofcom has told stakeholders to get a move on. It's not a done deal, though - with Richards pointing out:
Confirmation of the practical feasibility of the plan is, however, not going to be possible in the near future, not least until the MoD has completed the current procurement of a supplier for its radar modifications. In the meantime, we will continue to impress upon those responsible for this work the important for consumers of its timely implementation, and of accelerating the implementation where possible.
Mobile Europe asked the two operators most likely to be affected, Vodafone and O2, if they think that the airport radar issue is likely to delay LTE service availability at 2.6GHz. Vodafone declined to comment, saying that spectrum clearance was a matter for Ofcom.
O2 said in an email: "It's our policy not to discuss our rollout plans. Ofcom is working with the radar operators to prioritise filtering in the South East, where the need for capacity from the 2600MHz band is likely to be greatest."
LTE