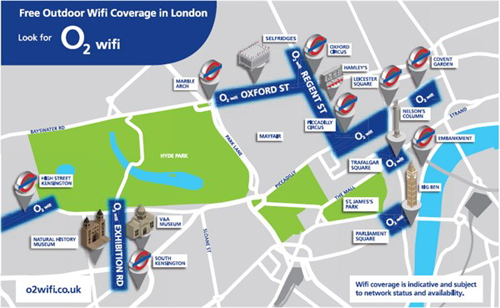 Telefonica O2 UK has seen around 5-10% of its 3G data traffic being carried over WiFi across the areas where it has installed free public access WiFi in central London. The access points are also carrying about the same amount of traffic from non-O2 customers, meaning that of all O2's data traffic in the areas covered 20% is now going over WiFi.

The company, which in June 2012 rolled out 100 free public access WiFi access points in specific locations across London, including Trafalgar Square and Exhibition Road, said that of a total 450Gb* data volume per day across its central London coverage area, around 80-100Gb is being carried over WiFi.

Of that, about half is data from O2 customers, and around half is data from non-O2 customers using the free WiFi. Simon Brown, New Technology Trials Manager for Telefonica O2, asked if that in fact represented quite a low figure, said that it was a reflection of the fact that the numbers include all O2's macrocell traffic across a largish area within which the small cells were operating.

So treat these numbers carefully; they're not saying that if you install free WiFi under a macro layer you will only achieve 5-10% data offload (and a similar amount on-load) but that even with a relatively small scale deployment - O2 deployed 100 WiFi hotspots in all across several central London hotspot areas - 20% of all data traffic was carried over WiFi.

Note also that in the future these cells will not just be WiFi. The Ruckus units have a slot in the back that can take a cellular small cell, and Brown said that the next stage of the deployment would see O2 put Alcatel Lucent femtocell units into the cells "in the very near future". That could give the operator more control in the management of traffic loads to match the required user experience, as well as a capacity boost gained by reusing wireless spectrum.

To that end, Brown said that further next steps for O2's outdoor public access small cells would also include adding EAP-SIM capability to allow greater user mobility between layers.

The operator also wants to do further work to prove its backhaul architecture of 28GHz P2MP (currently provided by Cambridge Broadband Networks) and 5GHz wireless, alongside looking at 60GHz backhaul.

As for performance, the company said that in Exhibition Road, where it has nine Ruckus Wireless 7762 units providing coverage, it has achieved an overall capacity equivalent to 1Gb per square kilometre, and user throughput of the 50Mbps downlink and uplink. In Oxford Street, where it has 40% of its cells located, the company said 50% of the data it is carrying has come from iOS devices.

In Parliament Square the company is seeing a high peak in uplink traffic in the mid to late afternoon - something it ascribes to broadcasters and journos uploading copy and content. In Kensington High Street there is a clear reflection of an evening economy driving high usage in the restaurants and bars right through to 1.00am. The Apple-happy users in Oxford Street also pound the network right through the afternoon and evening.

(*Note, during the Olympics volume rose to 550Gb)