No operating segment within Alcatel Lucent was profitable in the first quarter of 2012, with the networks, software & services and enterprise division all contributing losses.

The company's executives, CEO Ben Verwaayen and CFO Paul Tufano, said that a combination of a lower than expected volume of sales, plus a higher than expected ratio of low margin business within its sales mix, had lead to operating losses for the company of €221 million for the quarter and a reduction in gross margin to 30.3%. 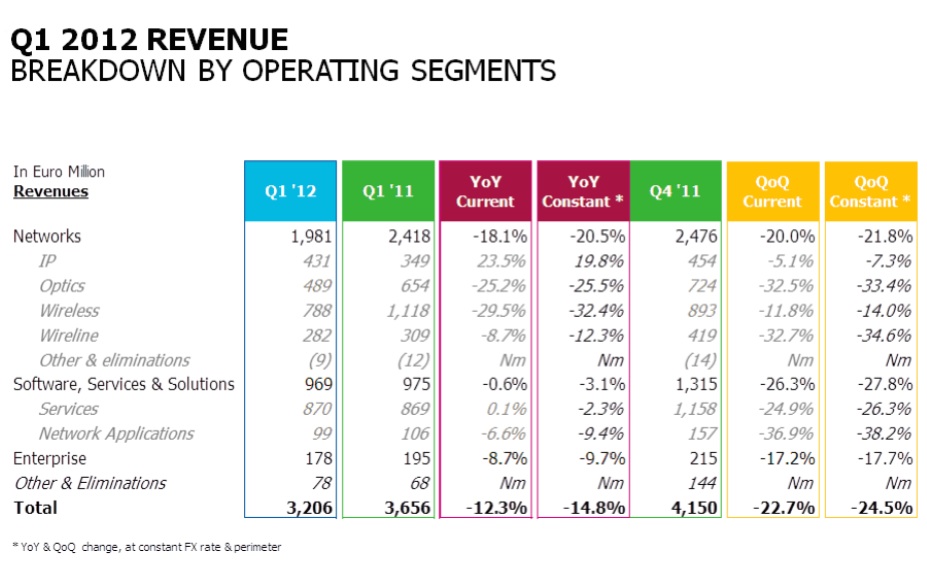 Verwaayen described this margin position as being "at the bottom of the trough" rather than reflecting a fundamental shift in the long term nature of the business. This low margin position was recorded despite the company having taken €1 billion off its annual operating costs, and cutting another €100m in the first quarter of this year.

Of particular note was a delay in expected GSM contracts in China, where the central bidding process has been delayed to the second quarter. Verwaayen also said that Europe had performed poorly as a region. European sales were down 22% on a year on year basis.

The networks division recorded an operating loss of €143 million, with wireless networks sales down 30% year on year. Wireless sales have progressively declined over the past four quarters, decreasing from a Q1 2011 figure of  €1.11 to €788 million for the 1Q 2012.

The company would not necessarily seek to focus just on growing revenues, CEO Tufano said. He said that it would instead seek to address profitability by concentrating on high margin business at the expense of revenues, if necessary. Tufano added that LTE had in fact retuned better than expected margins, although they are not at the level of legacy technology such as 2G. The company has over 20 LTE contracts, a strong position in LTE in the USA, Verwaayen said, and was in a good position to expand that in other territories.

But the Al-Lu CEO said that he was more positive about Al-Lu's position for the rest of the year.

"Our order book looks strong for the rest of the year. We do think we will do quite well in China. We also have revenue growth in WCDMA in China and other territories, and we also have a very strong order book in the USA, which is a good place to have strong orders in," he said. A growing preference for operator investment in customer experience solutions was another area where Al-Lu could grow high margin orders, he said.

"I think you would want us to be very prudential," he said. "We are saying we will be cautious. We are not speaking to say the things you'd like to hear, we're going to say the things we think at the time. But we are confident in our pipeline to come back, confident that we understand what happened in Q1, we understand clearly the robustness needed in the operation."

Verwaayen said that since he took over he had taken the action necessary to turn Al-Lu into a profitable company (despite this quarter's operating loss). Now the challenge was to make the company a "robust" company, able to sustain its performance despite macro conditions.