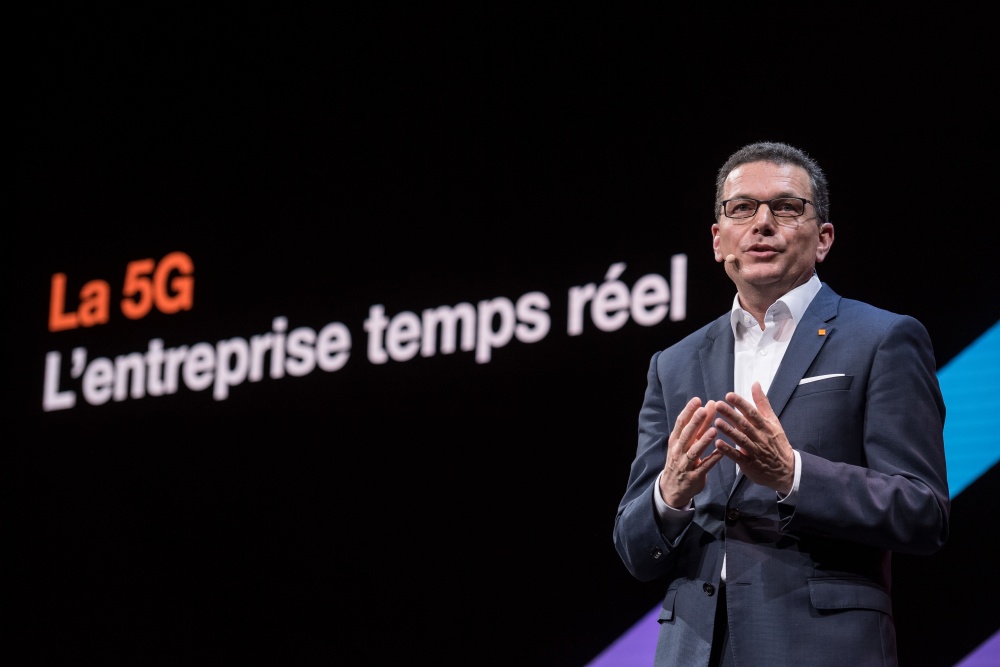 We last met at the Orange Business Summit in Paris in April 2019, which was one of the most surprising briefings I have ever attended. Stéphane Richard, Chair and CEO of Orange Group, explained that it the first instance, the operator would develop non-commercial 5G networks in close collaboration with partners from industry and transport to meet their specific needs. This is unlike any other approach to any other mobile ‘G’. So, over a year later and in the midst of a pandemic, how’s progress?

One thing to note is that France has yet to hold its initial 5G spectrum auction – it was postponed because of the coronavirus outbreak and is now expected to go ahead in September on agreed terms.

Another milestone was the announcement of Orange Group’s five-year strategic plan, Engage 2025, last December. It identified, “Accelerate IT service development for our business to business (B2B) customers and scale up cybersecurity” as main engines of growth (along with its ambitions for financial services across its footprint and activities in the Middle East and Africa).

In the light of these expectations, Reisinger was also pressed to think deeply about Orange Business Services’ role by CEO Richard asking him, “Who are you really? Is Orange Business Services an operator still or an integrator?”. Reisinger strove to answer these questions, which reflect his thinking about positioning, throughout the interview, building on the statement, “We are a network-native digital service company”.

And one that defines four categories of digital services, cloud, cyber defence, data and analytics and smart mobility services, which draw on 5G capabilities, like slicing, to integrate mobile B2B with the IoT digital potential for it. This article's focus is mostly the latter.

That IT services are expected to be a main driver of growth came as no surprise to long-term Orange watchers: many operators have the same aspiration regarding IT as well as connectivity for years, but hardly any can demonstrate much success – BT is in the process of massively paring down its Global division, for instance – whereas Orange is widely recognised to have been working steadily towards this goal for years.

As Reisinger notes, “We have always pushed for more IT integration service on top of telecommunication services, because we have credibility as a managed service provider. And of course, the growth, notably in Europe, in the IT and telco space is bigger than in the pure telco space.”

Orange expects the next evolution of digitalisation for businesses “will be the meeting between the IT world and the operational technology [OT] world” and that’s going to be a big hill to climb and therefore a huge market. He points out, “In France, for example, according to last year’s numbers, only 30% of factory shop floors are really ‘connected’ while in the US, the average age of manufacturing tools is higher than 20 years.”

Orange Business Services is addressing that opportunity along with its ‘identity crisis’. Reisinger concluded in response to Richard’s questions, “We need the combination of two halves of a brain in one head; one half is telco and the other IT, both with the advantage of being at global scale”.  The division is pushing that advantage to drive growth: at the end of 2019, 37% of our revenues came from integration and IT, services which rose to 39% by the end of Q1 2020.

5G in the enterprise

Clearly the big prize is expected to be from exploiting 5G’s attributes to enable new business and operational models, so how is that co-collaboration and development  talked about at the Orange Business Summit progressing?

Reisinger says, “We are very pleased with the engagement on co-innovation – in anticipation of the 5G we expressed our intention to learn fast with our customers. We have distinct vertical approaches that we are looking at in France: smart cities and smart buildings, another is connected cars then digital industry or industry 4.0.

“An example of the latter [is] we have signed agreements and there are real, concrete co-innovation projects with Schneider Electric Group and a big French electronics firm called LACROIX Group, and a few others. We have distinctive views on how can we can drive productivity in the industrial processes thanks to 5G and its capabilities, like slicing or having a much better mobile throughput even we're at the point of activity off the industrial knowledge road.”

Pushed for more information, he states, “I cannot go into further detail than we are really driving up the productivity of the industrial knowledge worker, and we agreed [not to talk about it] because how they're going to redesign their internal organisation is a competitive issue for them – it's a productivity gain.”

Who would Reisinger describe as an industrial knowledge worker, the people on the factory floor or office workers? He replies, “Both within the context of Industry 4.0 – you have mathematicians and PhDs on the factory floor and the so-called blue collars – I mean people who are involved in the industrial processes,” which he agrees is a wide spectrum of people and skills.

Reisinger continues, “I am talking about knowledge workers who have data they didn’t have before to do their work more productively than before on the factory floor. The important word is real-time as when workers have information available in real time that can really change how you can organise certain processes.” He reminds me that at the Summit last year, speaking about the co-collaboration work and plans with Orange Business Services, Vincent Bedouin, CEO of LACROIX stated, “Real time is cash”.

Reisinger says, “Real time give you a better, immediate decision making because you have an abundance of data available if you have it well organised. if you think about industrial processes or connected cars, the real time is about their time critical nature”. This segues seamlessly into another point he is keen to make: “We see this criticality in another business – our core business – which is also transforming quite fast.”

He points to the softwarisation of services and software-defined wide area networks (SD-WAN) an area where telco and IT intersect. He highlights Orange Business Services’ leadership in this growing sector: “If you look to the Gartner Magic Quadrant, for two years now [it has become] a European play with Orange Business Services the leader for SD-WANs” whereas in the earliest days of SD-WANs the Americans appeared to be in the ascendancy."

Siemens was an early SD-WAN customer, which Orange Business Services supports on a global basis, and in the last year it signed up Mars and Sony too. It partners Cisco Viptela, Infovista and security specialist Fortinent for its SD-WAN solutions because, as Reisinger says – it’s a recurring theme throughout our interview – “The internet of enterprises is an ecosystem play and we want to give options for tenancies [partners] and for customers [around the globe].

Highlighting the emphasis across all its services on cyber security, he observes, “Fortinent has a very strong device…which if you think about data on the production floor and the edge phenomenon…this has more than a dozen-fold compute power compared to classical routing devices.”

I ask about progress with edge. Reisginger replies, “It's a great opportunity; remember who owns the last mile – usually an operator – and the edge sits within that last mile, so again it is combining the two halves of our brain”.

He concludes, “We connect, we protect and we innovate for sustainable business growth of our customers”, with sustainable having the double meaning here regarding both profitability and eco-friendliness as an underpinning principle of Engage 2025 is for Orange Group to be carbon neutral by 2040, in compliance with the GSMA guidelines.