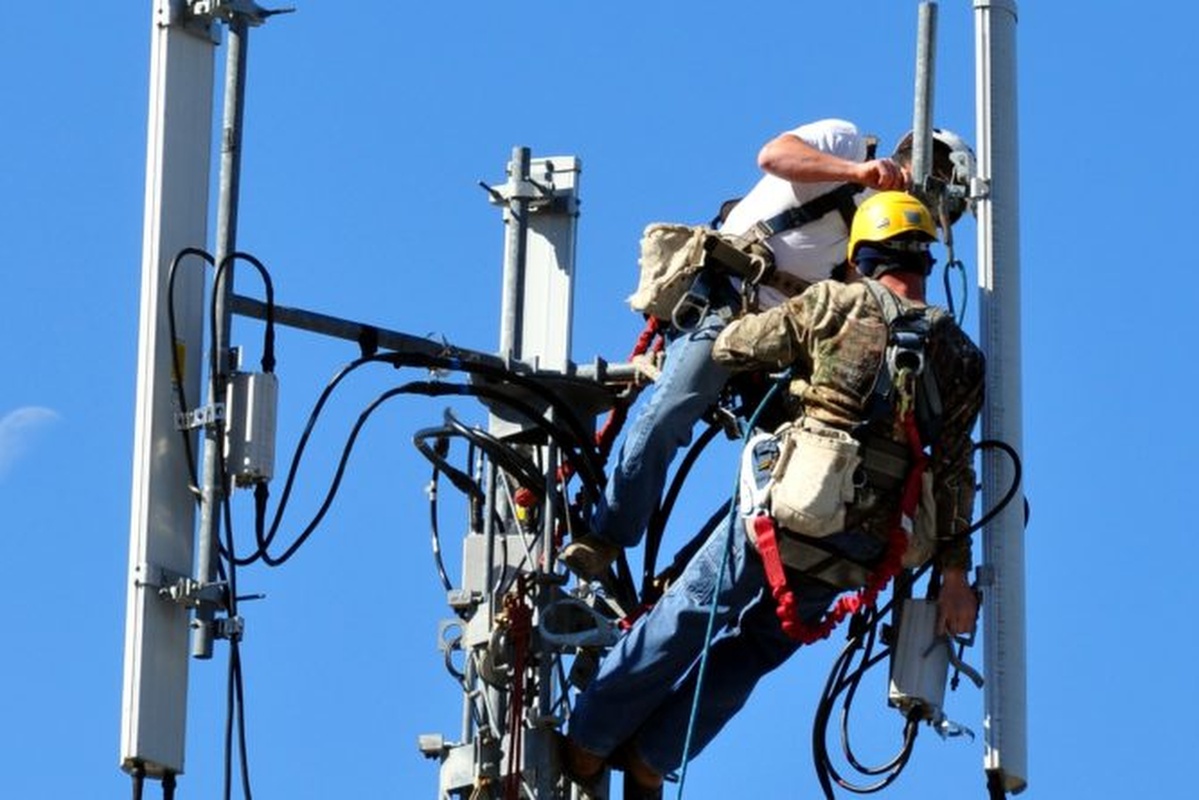 Optimistic 5G forecasts assume that telcos’ spectrum needs are met, writes Saad Asif, a Contributing Analyst for MTN Consulting – and the upcoming WRC-19 is key to this.

To predict the future, you have to understand the past. The focus of this blog is three-fold: (a) to provide a brief summary of the key activities that took place at WRC-15 (b) to give a sneak preview of the upcoming WRC-19 and (c) to analyse the cost and global implications of spectrum for 5G.

Ericsson recently predicted that by 2024 5G subscriptions will reach 1.9 billion, 35% of traffic will be carried by 5G networks and up to 65% of the global population could be covered by 5G. This is one of the many forecasts that predict the success of 5G, however there are many variables attached to it. A key one is the availability of suitable, affordable and importantly harmonized radio frequency spectrum, which is the focus of this blog.

At the upcoming World Radiocommunication Conference (WRC), the overall goal of the telecommunication world at is to secure a sizeable chunk of harmonised spectrum for 5G.

Government policymakers want to auction or license this harmonised spectrum to cover their current and future budgets. Telecom network operators on the other hand are interested in getting this harmonised band(s) at a reasonable cost from governments in order to meet operational excellence requirements and achieve their business targets in partnership with their vendors.

Wireless communications require airwaves to provide services. Airwaves, or electromagnetic spectrum, consist of a range of all types of electromagnetic radiation, from radio waves to gamma rays.

The range of frequencies that are used for providing mobile and Wi-Fi connectivity falls under the radio frequency (RF) portion of the electromagnetic spectrum. RF spectrum ranges from 3kHz to 300GHz (Figure 1).

Fronthaul, which is a much newer concept, connects remote radio heads mounted on towers to baseband units located in a centralised location. Fronthaul requires much higher bandwidth and minimal latency and thus for the most part it is supported with optical fiber. However, in case fiber is not available, a wireless medium can be used (eg microwave – ssFigure 2).

Figure 2: Use of radio waves in cellular networks

This huge function is performed by the ITU (International Telecommunication Union), which is the United Nations’ specialised agency covering information and communication technologies (ICTs). More specifically, the ITU’s Radiocommunication sector (ITU-R) takes care of this obligation at the global level.

ITU-R allocates spectrum through the pivotal World Radiocommunication Conference (WRC), which takes place once every 3-4 years. WRC is the most significant inter-governmental event related to the frequency spectrum.

WRC allocates frequencies to everything that needs airwaves for execution – from as small as garage door openers all the way to space satellites, and everything in between (terrestrial, aviation, maritime, etc.).

Once spectrum is allocated at the WRC, national regulatory bodies such as the FCC and can assign specific bands to specific service providers (such as AT&T, Sprint, etc.) through a license for a specific number of years.

The demand for wireless connectivity and applications on the go is continuously on the rise. The wireless industry requires quick access to frequency spectrum and a lot of it, on a worldwide basis.

Back in 2014, the ITU-R predicted that the world would need an additional 1340-1960MHz for broadband services by 2020. The aim of the world body was to get harmonised spectrum in the range suggested by ITU-R, preferably on a global scale, if not then at least to some extent on the regional basis.

To keep the story short, WRC-15 can be considered as the first major international event that looked into allocating frequency spectrum for 5G. However due to some geopolitical challenges and presence of many existing services, the WRC-15 was only able to allocate 51MHz for International Mobile Telecommunications (IMT) systems on the worldwide basis.

In addition to this 51MHz allocation which was made in the L-band (1-2 GHz), sizeable additional allocations were made on a regional basis. The total allocation was over 1500MHz, satisfying the regional requirements for the most part (Table 1).

To clarify, IMT is the flagship project of the ITU-R and covers 3G, 4G and 5G systems. The ITU-R doesn’t allocate spectrum for a specific mobile generation but rather in generic terms of MOBILE and IMT. This capitalisation means that the service has been allocated on a primary basis and no other service can interfere in its operations.

In the past, the identification of spectrum as MOBILE for cellular/broadband systems (including 2G) was sufficient. However, the advent of 4G/5G has the brought the concept of IMT systems to the limelight and now even if a service is already allocated for MOBILE, it doesn’t necessarily mean that it can be used for it unless it has been identified as IMT in the footnotes. 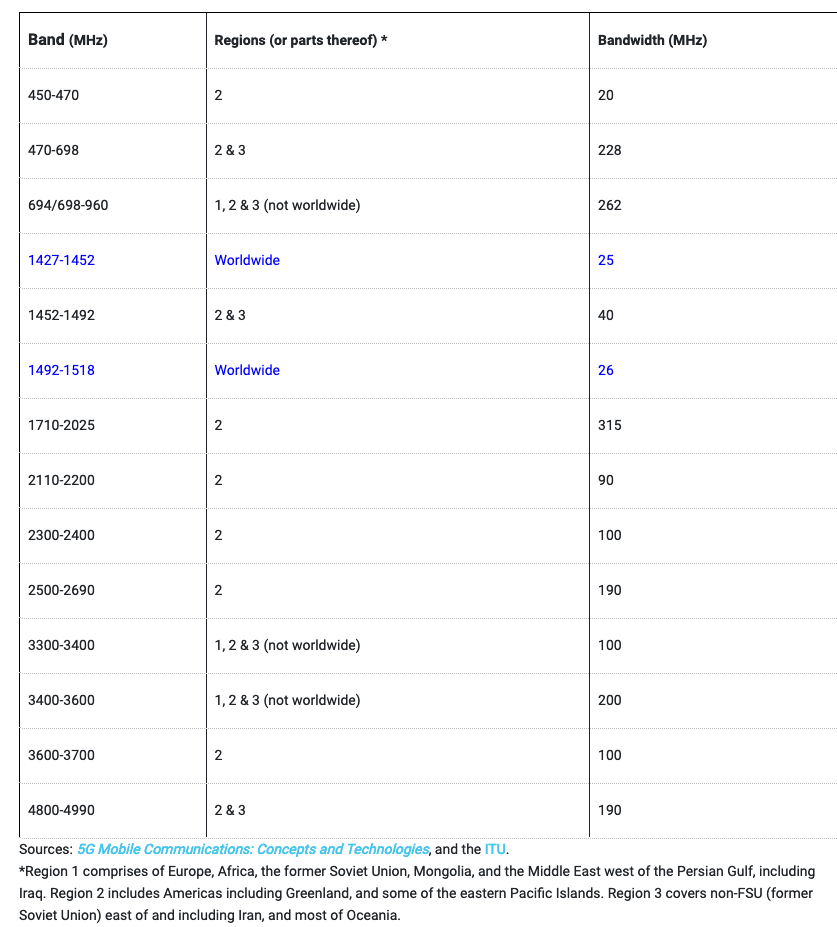 WRC-15 also identified several bands as study items for their potential usage for IMT. The range covers various bands from 24.25GHz to 86GHz. These bands are already providing a number of services particularly backhaul and satellite.

The specific services in these bands also can differ by region to some degree. Therefore, spectrum sharing and compatibility studies were required to look at their applicability of co-existence with IMT.

Before diving into WRC-19 it is worthwhile to look into the work executed by 3GPP in this regard after WRC-15. 3GPP, the flagship organisation for 4G and 5G specifications, identified the following two frequency ranges:

• Frequency Range 1 (FR1): 410MHz to 6000MHz with channel bandwidths in the range of 5 to 100MHz with increments of either 5 or 10MHz. This frequency range is applicable for both frequency and time division multiplexing modes.

3GPP focuses more on the nitty gritty of spectrum which has been identified in broad terms by ITU-R. 3GPP works more on the lines of identifying channel bandwidths and duplexing modes to support the underlying mobile services.

It can be said that hundreds of resources, thousands of workforce hours and millions of dollars have been spent to study the subject frequency range.
The upcoming WRC-19, scheduled to take place later this quarter, has two major tasks when it comes to the allocation for MOBILE/IMT.

The problem is that all the bands listed in Table 2 are already in use. Further identification for IMT on a primary basis could face stiff opposition particularly from the satellite community at the WRC-19.

Opposition from satellite is even more an issue than 2015 as many new players have entered this space, including some deep-pocketed companies like Amazon and Facebook. 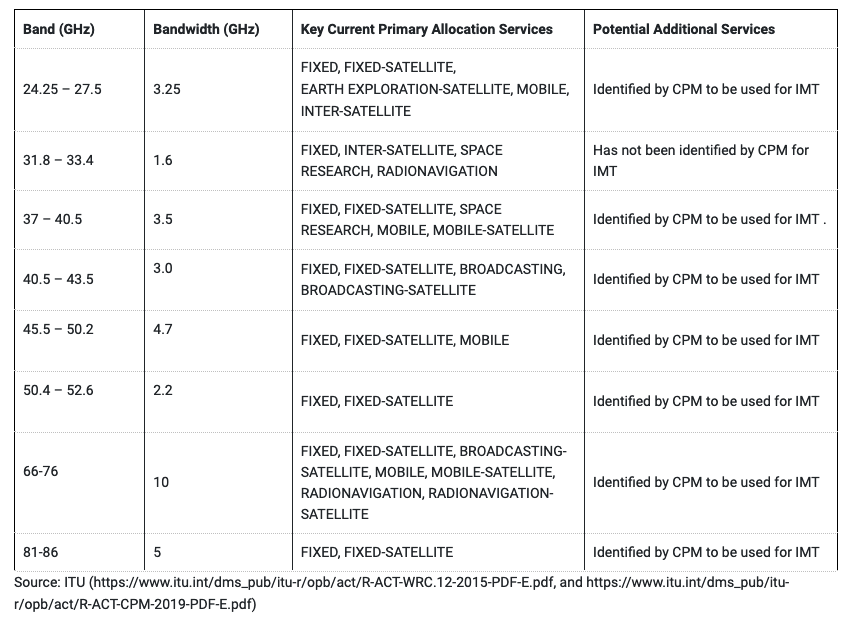 At this stage, the telecom industry is not close to achieving its target of harmonised, adequate 5G spectrum resources. Basically, there are two camps – one is favoured by China and other by the USA. Disagreements are not settled easily at this stage as there is a first mover advantage in the development of mobile wireless generations.

The market leader can set the stage for future infrastructure development, product development and specifications. In this context, three ranges of spectrum bands have been considered namely:

• low band (sub 1GHz) which is used heavily for broadcasting and wireless services.

• millimeter wave or mmWave (24GHz to 100GHz) which is used for many non-mobile services (see Table 2).

The battle hovers around the sub 6GHz and mmWave bands. China is looking towards 3.5GHz, whereas the US is focusing on multiple millimeter bands.

The mid band, particularly the 3.5 GHz band that ranges from 3.3 to 3.8 GHz, is the most sought after band for use as a core band for 5G. That’s because of this band’s availability and lower deployment costs as compared to mmWave bands. China already assigned 200MHz in this mid band. By contrast Japan and South Korea are working in both mid and mmWave bands. The rest of the world for the most part is playing catch-up on 5G spectrum assignments (Figure 3) 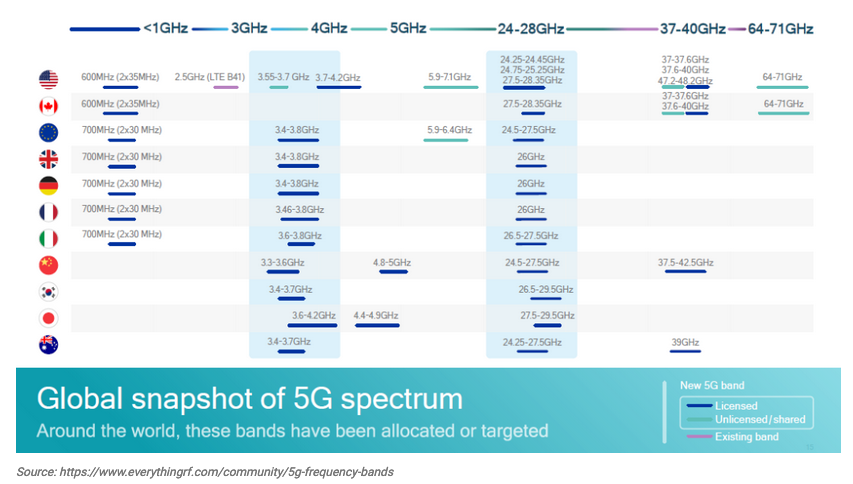 The US faces a unique problem in the mid-band. Namely, the US Department of Defense (DoD) currently holds roughly 500MHz in the 4GHz range and thus it cannot be used for commercial operations. According to a DoD report, the estimated time required to clear spectrum (relocate existing users and systems to other parts of the spectrum) and then release it to the civil sector, either through auction, direct assignment, or other methods could take 10 years.

Spectrum sharing between entities is another option and is a slightly faster process, but it could still take five years according to the same DoD report. Thus, the FCC has focused on the mmWave band. It had to auction out 24GHz and 28GHz bands and is planning to offer 37, 39 and 47 bands as well in the future.

This is one of the key factors behind the limited coverage launches of 5G in USA. Verizon’s 5G network is based on the 28GHz and 39GHz bands, AT&T uses 39GHz, and T-Mobile is planning 28GHz. Sprint is eyeing the 2.5GHz band as it doesn’t have any spectrum assets in the mmWave range.

A study conducted by Google for DoD found severe limitations in the mmWave band. It concluded that for the same number of cell sites (macro cell sites and rooftops), 1Gbps can only be provided to 3.9% coverage area at 28 GHz (US model) as compared to 21.2% at 3.4GHz (Chinese model).

The same study also estimated that it will require about 13 million utility pole-mounted 28GHz base stations (one of the key choices of US operators for mmWave) and $400 billion capex to deliver 100Mbps edge rate at 28GHz to 72% of the US population, and up to 1Gbps to approximately 55% of the US population.

Figure 4 illustrates the problem, showing the propagation difference between 28 GHz and 3.4 GHz deployments on the same pole height in a relatively flat part of Los Angeles. 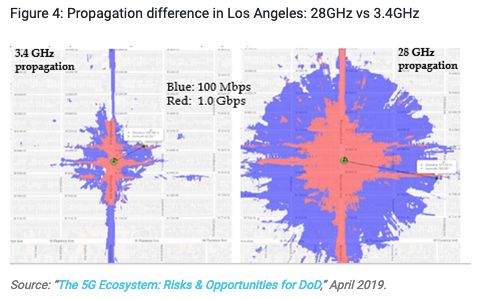 In a nutshell, mmWave bands will likely have a detrimental impact on operators’ budgets, at a time when they are not eager to ramp up capex. At the end of 2018, Verizon held ~$120B in debt with ~4% dividend yields, while AT&T held ~$175B in debt with over 6% dividend yields. T-Mobile holds ~$25B in debt, and Sprint holds ~$40B in debt.

These companies are at the forefront of the U.S. effort to develop 5G, but their balance sheets suggest that they may struggle with the cost of a full mmWave network roll-out and the infrastructure it would require.

The wireless world’s technology leadership role will be at stake at WRC-19. History has proven that having access to the right set of spectrum assets can deliver a competitive advantage in the overall supply chain for years to come. The implications are vast both from the commercial and strategic point of views, impacting governments, operators, vendors, and ultimately jobs.

As of today, the industry lacks harmonised frequency bands for 5G. Perhaps at the end of WRC-19 the world will be closer to achieving this goal.
Stay tuned for more news from MTN Consulting on RF Spectrum and WRC-19!

This blog originally appeared on the MTN Consulting site on 4 October 2019.

Saad Asif is a Contributing Analyst for MTN Consulting and a recognised industry expert in wireless communications. He has worked in the field of telecommunication for over 21 years, and has authored three books and multiple peer-reviewed technical papers. He has been granted multiple patents and is a senior member of the IEEE.