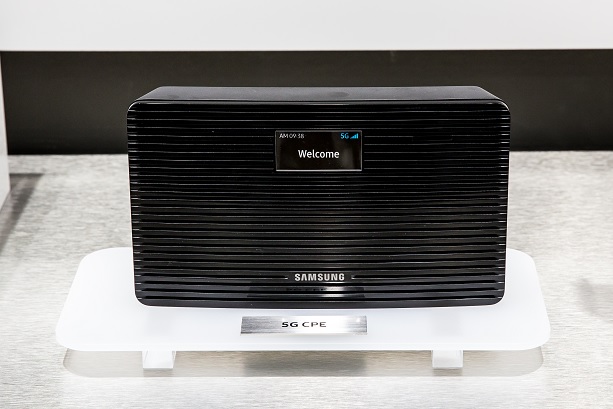 The fibre market could be on course for a shake up as Arqiva and Samsung launch the first 5G fixed wireless access (FWA) field trial in Europe, but questions remain around cost and technological obstacles.

First announced in February, the trial by Arqiva and Samsung in London is now underway, connecting a 5G modem in Arqiva’s Soho office with a transmitter on another building 230m away to stream high quality video and virtual reality content across the 28GHz band at speeds of over 1GBps.

The pilot will run for the next four to five months, according to Arqiva CEO Simon Beresford-Wylie, with a wholesale FWA offering slated to hit the market in the second half of 2018.

The opportunity as Arqiva sees it comes from the UK’s lagging connectivity performance. According to iDATE figures, the UK has only three percent fibre to the home penetration, compared to 76 percent in China or 24 percent in the US.

Meanwhile, on 4G availability, the country was ranked 43rd in an OpenSignal report released in June.

Arqiva plans to offer the service wholesale to operators as an alternative to fibre, inspired by Verizon’s work in the US. Verizon decided to move away from the expenses of maintaining a copper network and extend its coverage quickly using FWA, a model which Arqiva believes would appeal to operators on a wholesale basis in the UK.

“[5G FWA] represents an alternative to the Openreach fixed access offering, and it’s something operators can include in a bundle.”

From an infrastructure perspective, there are also promising signs. Of the 33 boroughs in London, the provider has signed deals with 14 to gain access to street furniture including lamp posts.

But there are still unanswered questions standing in the way of FWA. The first, and most pressing, is about cost. Unless FWA can be made less expensive than fibre, there will not be much of a market.

The in-built advantage is, of course, that digging is expensive and wireless access is comparatively quick and cheap to set up.

“Part of the reason for doing the trial is getting a better idea of the cost of the equipment end-to-end from core, through base station [and] transmission,” explains Beresford-Wylie.

The company’s current view is that a wireless alternative would be between 20 and 40 percent less costly than fibre to the premises due to the digging costs and increased speed to deploy, he says.

But part of the cost advantage, adds Beresford-Wylie, comes from the use of 5G itself.

“Fixed wireless access has been around before, but they’ve been niche technologies like WiMax,” says Beresford-Wylie. “The ecosystem around them is such that the costs have not come down to what they need to be.”

By contrast, FWA based on 5G will exist within the 3GPP 5G ecosystem.

“Modems, radio frequency chips, devices will be produced at scale which means the cost will come down,” he says.

There are also still technological challenges. For one thing, as with fibre, Wi-Fi connectivity is not currently advanced enough to convert the speed received by the 5G modem of up to 1 GBps into the same speeds for consumers, although remedies such as ethernet cables are being explored.

The quirks of the 28GHz mmWave band also come into play. Placing a hand in front of the modem in Arqiva’s demo room is enough to knock the speed down from over 1GBps to 600MBps, which is far from ideal in a city where disruptions such as weather or wildlife are commonplace.

But according to Woojune Kim, VP of Samsung’s Next Generation Business Team, this is not a problem.

“The thing about mmWave is it uses multiple paths. Right now that generates 100 beams. It has 100 beams that are bouncing off everything all around you. So if you block one, it goes through another one.”

As Kim notes, transmissions in the 28GHz band and other high frequency bands do not behave in the same way as those in lower bands due to the lower wave length.

“The industry is learning about this,” explains Kim. “Before the industry before was saying, can I just go through [an obstacle]? So that’s why 800MHz was used, because you can just go through wooden or brick walls. It was more of a bulldozing approach. With mmWave it’s more bouncing along the streets until you get there.

“So it’s a step-change in how we have to think about this. The industry has a lot to learn there.”

Overall, though, both Kim and Arqiva’s Beresford-Wylie are confident that this quirk in 28GHz can be worked around.

Whether all of these challenges can be surmounted to make FWA a workable prospect in the UK will be the wider question.