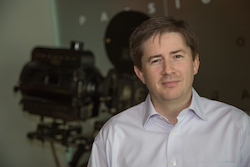 Innovation may drive changes in the telecoms, but according to Bell Labs' President, the industry may soon hit a limit in just what it can do.

Marcus Weldon (pictured) says Alcatel-Lucent's research arm recently mapped out how much wriggle room is left and discovered there is a factor of 1.4 when it comes to spectral efficiency, a factor of five when it comes to wireless innovation such as the shift to millimetre wave, and a factor of 18 when it comes to small cells. He says the latter would raise the slightly comic circumstances of one cell serving one user, with antennas having to be added to humans to facilitate connectivity.

The current constraints on just how far things can be pushed is where the likes of Bell Labs' Irish outpost comes in. The centre, on the outskirts of Dublin, recently celebrated its 10-year anniversary.

When Mobile Europe visited the centre last week, as part of the company's FutureX Days showcase, it was confronted with objects from the industry's past and future. In between bygone items of the telecoms world, from vintage phones to a slice from the first transatlantic fibre cable, are numerous demonstrations of prototype technology. These range from solar powered small cells to smart sensors that are powered by kinetic energy.

Weldon argues the current constraints on just how far they can push things is where the likes of the demonstration projects in Dublin come in. He says: "The physics of access are now so constrained that we need to do magical things. 5G things."

But he says that the current debate around 5G raises questions about whether technology drives innovation or vice versa. He says: "In some ways we have been building networks for a future perceived need and then find out ways to use that network. If we hadn't built LTE, we'd probably not be talking about IoT, because 3G was never going to be enough."

He says the industry broadly knows the types of technology that will drive 5G, whether it is harnessing unlicensed spectrum, millimetre wave beamforming or small cells. He adds: "The question is around the optimum hardware that will use these technologies so you have the right economics and flexibility."

One downside of the current excitement around 5G, according to Weldon, is it devalues the present work being done. He says: "The problem is we are five years away from it and we have already exhausted the hype. That's generally not so good because it means we have to talk about something else soon. Then you are devaluing 5G. I think we got a little over-exuberant about 5G because we are in a lull of something to say as an industry."

Weldon argues that in order to succeed, telcos need to satisfy four key paradigms, those of connect, cloud, control and content. He believes operators could have a lot of potential within offering context sensitive information, given the wealth of data it receives.

He says: "The network has a lot of knowledge about how people move and behave, and who you are next to so that's an element of control. A network operator could offer what I call a contextual platform that says "where are they and what are they doing".

The shift towards virtualisation is creating an unexpected boon for operators, Weldon adds, where they can become more sophisticated cloud players, offering content hosted there. "Service providers have a persistence. They have a way of adapting. They struggle to adapt as fast as the rest of the world but by NFV coming along, the big impact is not about virtualisation; it's about making them cloud players.

"Yes, they get some gain to their network, scaling it elastically and getting higher gain at lower cost. All true but the revolution is not that. The revolution is it makes them cloud players. When they are a cloud player, they are in control, they could be a content hoster. It gets them into a realm they wouldn't have got to if we had stayed in boxes."

Whether by accident or by design, telcos will need to find new solutions in order to find that piece of magic.