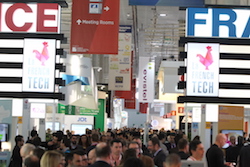 A robot was chosen to be the public face of SK Telecom's 5G strategy at Mobile World Congress, with the Asian operator confident it will extend its lead in LTE into the next generation of mobile technology.

The white humanoid, with eerie blue eyes that followed attendees around the hall, was connected to a nearby human, with their body movements being mimicked by the robot. SK Telecom used it to demonstrate the low latencies it said will be essential for connectivity beyond 2020.

He says 5G will need to meet three key criteria, in addition to providing capacity one thousand times bigger than today and latencies one thousand times shorter. These are customer experience, new business opportunities such as large scale IoT networks and substantially improved power usage and efficiencies.

It is the second of the three that interests Pete Carson, Senior Director of Product Marketing at Qualcomm. Suggestions that 5G is mere hype are understandable given there is a lot of requirements within the Internet of Things that LTE can handle, according to Carson. He believes the problems start when you look at hundreds of thousands of devices within a small area. "There's a lack of signal capacity in today's networks," he says.

Power is also an issue, Carson adds, particularly for the likes of monitoring devices, which will only send small amounts of information but will need to last for years. This will need a rethink of how those radio networks operate.

SK Telecom's Choi suggests the 5G network of the future will be two tier initially. The first will be an evolution of current LTE-A networks, providing cellular coverage through macro-cells and broadly a consumer play. These will run in the sub-6GHz bands.

The second will use the likes of massive MIMO antennas and beamforming and will be a means of dealing with capacity issues. Adds Choi: "SDN and NFV will be key enablers for networks to be really programmable and flexible."

One interesting area is that of voice, with both Carson and Choi suggesting VoLTE, once it becomes a mass market proposition, could be the voice technology used for decades to come. Carson says: "Voice is the hardest thing to replace, whether its in wired or mobile. There was very little difference between 2G and 3G. There will be a couple of decades before VoLTE replaces CSFB."

He adds: "But when we have VoLTE out there, how do we reinvent it for 5G? Should we? In my opinion, probably not. Once you get voice right, it's very sticky and hard to replace."

Last week saw 5G establish itself as one of the key areas of focus for the industry, with the European Commissioner of Digital Economy & Society arguing it should be the "nervous system" of future European economies.

European operators made the case that the region would be at the forefront of developing 5G benchmarks and standards. However, SK Telecom's Choi drily notes how parts of Europe and the United States still lag behind Asia when it comes to LTE adoption, and feels Asia will continue its lead for some years yet.

He says: "We have been winning at 4G for a long time, particularly SK Telecom. We had many world firsts. That means we are under more of an obligation [to succeed at 5G]. There's a lot of momentum to always be the first one in the technology evolution. That's why we are spending so much time researching."

In a sign of how Asian operators see their European and American rivals, he warns: "Eventually they will follow what we are doing with 5G."​