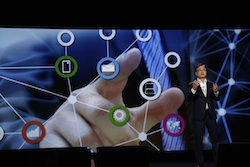 The enthusiasm around the Internet of Things dominated this year’s International Consumer Electronics Show (CES) where connectivity was showcased in a myriad of ways, from buttons to BMWs, chipsets, helmets and water heaters.

The subject was at the top of the agenda for a number of key industry players, including BlackBerry, which unveiled an IoT platform based on its QNX software. Meanwhile, Samsung CEO BK Joon took to the podium at CES to speak at length on the importance of collaboration in making IoT a commercial reality while also announcing an incoming €84 million investment in its developer community.

Yet amid the hype and a flurry of announcements, a clear direction for IoT has so far remained murky, with the multitude of connected devices suggesting a lack of focus alongside a jumble of competing standards.

With the topic to the fore at CES 2015, are things any clearer?

The connected car industry, which arguably has so far seen the most prevalent and effective M2M implementations, proved one focal point at this year’s CES. Saverio Romeo, Principal Analyst at Beecham, believes that the automotive industry will continue to see the majority of M2M/ IoT activity in 2015.

“The connected car is probably the most advanced segment in M2M/ IoT at the moment and that’s interesting because it’s gone well beyond connectivity - we’re talking about servicing applications and the full role of software and analytics,” Romeo says.

“You’re also seeing all this movement around in-car computing through Google, Apple and BlackBerry. QNX, for example, has a clear path involving cars.”

BlackBerry’s IoT platform will initially be targeted at the shipping and automotive markets before being expanded into the utility and healthcare industries.

Romeo says that platform will also prove particularly appealing to enterprises looking to integrate machine-generating data with traditional enterprise IT data, an idea he claims is “emerging strongly from a variety of organisations.”

For that, Romeo explains, an integration platform is required - something that successfully merges both forms of IT into a single system. The machine power of QNX, he says - which was originally designed around the idea of being machine-connected - means that BlackBerry is now in a position to offer such a platform to enterprises.

Saverio adds: “BlackBerry can lead around its enterprise segment and heritage, but it has to move. I think because of the power [of QNX], people will pay attention.”

The connected home was another major focus at CES. While Samsung failed to divulge more on when and where consumers can expect to see its SmartThings platform put to use, its ambition to make all of its hardware IoT-ready by 2019 has significant implications for the sector.

Martin Garner, Mobile Analyst at CCS Insight, says: “665 million items [Samsung] shipped last year is a significant volume – if they IoT enable all of these, it should be a major addition to the IoT landscape.”

He added: “The main change to the company’s strategy will be in how it does this: presumably SmartThings will be central to it and they have so far said little about their plans for it.”

The operating system has failed to ignite within Samsung’s devices business, with it having only just launched the first smartphone to run the software.

Romeo suspects the manufacturer’s ambition for Tizen lies elsewhere, explaining: “On smartphones, Samsung will carry on being an Android-centric device maker, but on the connected devices they’ll look to free themselves from Android, and to create an ecosystem of their own, they’ll use Tizen.”

Away from Samsung, there was no shortage of companies scrabbling to show off connected home tech. Elgato showcased a new hub for the connected home for users of Apple’s HomeKit system, while chipmakers such as Qualcomm and MediaTek unveiled a range of routers and chips to help with the connectivity side of things.

“CES 2015 saw something of a gold-rush - a huge array of connected home players either rounding out their systems, or entering the market with largely me-too products,” says Garner.

However, he adds: “The main issue in connected home is the proliferation of technologies and standards - users and developers have hard choices to make to work out which they should buy into and support.

“There is growing realisation that the real value for connected home - and IoT more generally - lies not in the connection, but in the data generated by the connected things – collecting, understanding and acting on the data for each user and also use of the aggregate data. At present, many suppliers are not giving this enough attention.”

Maria Hernandez, Head of IoT at Cisco, agrees, adding:  “One of the key growth areas in the IoT space is in data analytics. With more and more devices being connected to the internet, from beds to homes and cars, the amount of data being generated is going to grow exponentially.

“In order for organisations to capture the value from this data and from IoT more generally they need to move from just connecting things to capturing insights. Data analytics is the key to this.”

While the picture may not be any clearer after CES, as the industry turns its attention to Mobile World Congress, more IoT announcements are likely. It remains to be seen whether the sector will keep up with new products that can handle the ever booming amounts of data being produced.