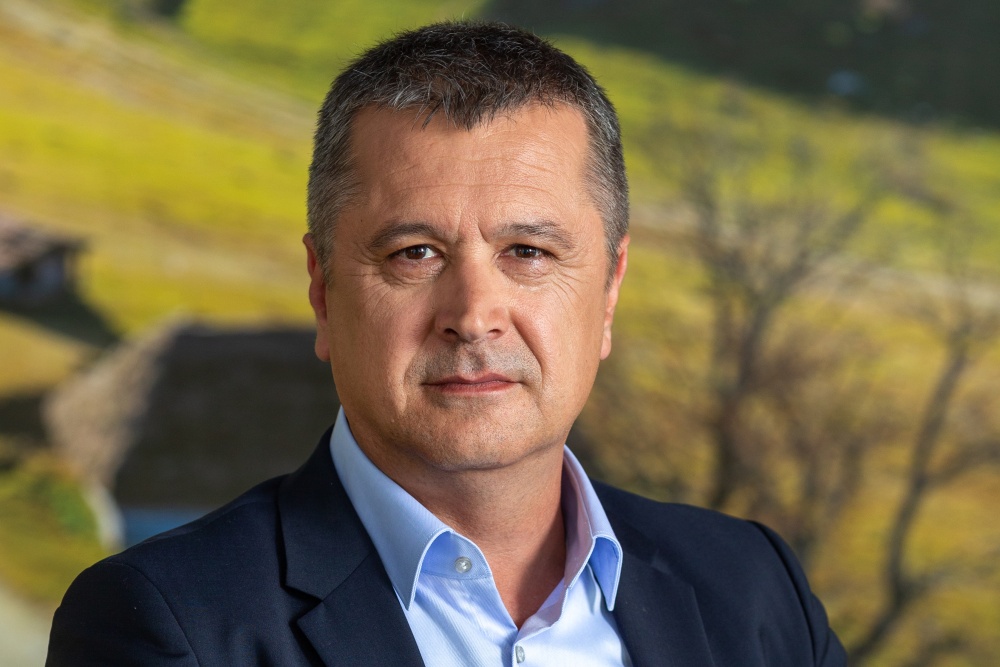 Comms services have transformed businesses and society, and could be our best hope of beating the Covid-19 pandemic, says our Gamechanger CTO of the Year, Catalin Buliga at Vodafone Romania. He talked to Nick Booth.

In its 23-year history Vodafone Romania has pioneered everything, from GPRS in 2001 to 5G in 2019, taking in call centres, SMS, 3G, 4G and IoT, which is why it is recognised as being at Europe’s leading edge for communications.

In the last five years, as the pace of change accelerated furiously, Chief Technical Operator Catalin Buliga has steered Vodafone Romania through the challenges of constant re-invention. The operator has consistently broken new ground, with Buliga leading from the front, with Covid-19 proving a dramatic if unwitting catalyst to change.

Constant change is exciting, but challenging and exhausting. Despite this, Buliga says that in his 31-year career in this unpredictable business, he’s never gone over budget. In his opinion, Buliga says that a human will always outshine machines if you “configure them” right. He should know: legend has it he carried out two separate CTO roles in two different countries for two years.

He sees being a people manager, rather than just focusing on technology, as the way to bring about the best returns. When Buliga briefs his technology team about a new project, it’s the phrase, “Nobody has done this before” that really motivates them. He stresses that in this situation you have to communicate clear objectives, so that everyone can see the value of the project, and insists invention for its own sake will never work. He says, “If you start without a clear picture you will get a fuzzy outcome.”

That initial burst of excitement is not enough to sustain the workforce though: along the journey there will be seemingly insurmountable obstacles, he observes. This is where it’s vital to keeping people believing in the cause. “In some projects we had no alternative; we had to find a solution as the business depended on it,” he says, adding that not all projects are “death or glory” and sometimes it’s enough to be first to discover a new method and enjoy first-mover benefits before the competition catches up.

Buliga acknowledges that quite often the technology evolves and takes him on an unexpected path. A case in point is Vodafone Romania’s recent developments with AI and big data, which have been part of the operator’s strategy for six years. Experience gained so far will be invaluable as the operator comes to terms with its latest initiative – edge computing.

AI helps staff to make decisions, and run faster and more accurate root cause analyses and spots incidents earlier than previous approaches. Vodafone Romania’s marketing people work with recommendation engines to help match the right offer to each customer’s needs, so a sale is less aggressive and more consensual – a perhaps surprising but welcome outcome from automation. “Hyper-personalisation has been AI’s best gift so far, as it has values in costs and customer satisfaction,” says Buliga.

For him, AI exemplifies the difference between theory and practice; he points out that there is a contrast between the dry, digital world of information and the complex, obsolete environment of real life. He says he has learned two unexpected lessons about AI.

He explains, “Firstly, don’t expect a text book product lifecycle. In theory any technology should observe the rules of the classic waterfall model, which predicts a series of linear, sequential returns on your investments of time and effort. That doesn’t happen with robots, which confound expectations by being volatile and unpredictable. Like prima donnas, they can produce outstanding results, but patience is needed.”

His teams have worked long and hard on specifications and architecture. With a combination of agility and sensitivity, they have patiently fine-tuning the machinery when they can, while being ready to make dramatic moves when the challenges of the journey dictate.

Buliga’s second discovery about AI is that it needs to be completely stacked with digital technology from input to output, front-end channels to backend. He found that if you leave all the outdated obsolete equipment in place for too long the operation to remove it can be terribly painful. He notes, “Few patients recover quickly from a drastic legacy removal. Tinkering with the backbone of the network is always fraught with danger and if the IT stack were a human patient few surgeons would relish operating.”

AI projects cannot really work unless you get the foundations right from the start. “It is extremely important to have a continuous focus on replacing legacy,” says Buliga. “Yes, there were some surprises. We had to re-think several times until the performance and outcome were good enough to continue.” This is part and parcel of any technological journey he reflects.

The coronavirus pandemic has also proved to be a catalyst for new approaches to technology. “The pandemic made us innovate and do things differently,” says Buliga. “Even though we changed things fast, it worked because the goal was universal, the logic was sound and the benefit was clear.”

Can digital transformation create new business processes or is it case of re-coding the old ones? “Where the business processes are the founding principles of the organisation you would be mad to tinker with them,” says Buliga. Hence digitalising old processes that need to stay is an obvious step. His approach is, “Make sure that you remove those incidences where human interaction is a distraction, cut the superfluous costs and give customers a better experience.”

Buliga adds, “You can’t change GDPR or compliance, and you can’t mess around with anything that’s regulatory, security or health and safety.” Equally, there are areas where technology isn’t just in the driving seat, it’s the steering column, the chassis and the wheels, and the rest of the body has to fit around it. Cybersecurity is a perfect example in Buliga’s view.

“Digital transformation can create processes and stimulate new thinking,” he says, “and it does – a lot.” When his team applied the agile management technique of ‘continuous change’ for IT, business and network deployment it had a tremendous, positive impact. It cut out pointless processes and handovers between business and technology. “That liberated people’s thoughts and actions, and the internal barriers came down,” says Buliga. “We worked faster and more inventively.”

How has Buliga’s job changed most drastically over his long career? He thinks technology has evolved much faster in the last couple of years than in previous decades. “You’re always learning about new technologies and re-learning the old ones. You have to if you want to keep competitive,” he says. “That’s been major change in my job recently. You can’t cope with this pace of change unless you’re passionate about technology.”

Romania certainly has a very competitive telco environment, with one of the best quality mobile and fixed comms networks in Europe. “A new technology goes live as soon as it becomes available and the demand is high. More people are in love with technology, but nobody can know it all.”

The other big change is the number of transformations needed to stay competitive. Five years ago one major technology transformation a year – either IT or Network – was considered enough. Now there are several major transformations per year, in IT, networks and business. “Five years ago I would have said this was impossible,” says Buliga. “The only constant is my passion for technology and how it can change people’s lives. That has always been my motivation and my team’s.”

Are there any aspects of telecoms evolution that have surprised him? “I wasn’t surprised by the evolution, but the speed of it,” he replies. “The cycle is shorter and this calls for agility, adaptability and speed of execution.”

Buliga wishes more people recognised the impact the communications industry has had in a time of crisis. He says, “Everyone can now see how crucial the comms industry is to people and countries. The pandemic has shown us how it links communities, and drives business and stimulates our collective economies.” It’s therefore puzzling and frustrating for him and his peers that authorities and regulators don’t treat mobile operators as providers of critical national infrastructure.

“Each comms service provider has to invest significantly at its own expense to build a national resource – the country’s physical comms infrastructure with fibre, ducts and physical sites. We could be spending our money more effectively if we could install the latest technologies and create the digital communication services of the future,” Buliga says.

“Who will invest in the new tech and services that are the real drivers for economic growth and a digital society? When countries build highways and roads the plans should include fibre ducts alongside. It’s not that far into the future [when] everyone will need a data highway to support connected cars and digital transport corridors.”

It will be impossible to do this retrospectively, Buliga warns. “I still hope that our industry will get the necessary support and authorities will realise that economic growth won’t come from spectrum fees and infrastructure rent charges, but from technology’s contribution to the digital society.”

Buliga’s staying within budget for 31 years might divide opinion among CTOs. Given the nature of his job – constantly moving into new areas and never knowing what to expect – this is an amazing achievement. Some CTOs might wonder how he does it. Others might ask why he does it.

“Staying within any CapEx or OpEx budget is a mindset,” he says, “whether you’re a CTO, engineer or any other expert. It takes time to share this mindset with the team, but eventually it becomes habitual and it is well worth the effort.

“When you already have the funding to cover a job, but the engineers are still trying to save money, then you know the effort has paid off. Similarly, when your team automatically thinks of ways of creating efficiencies to fund a great new idea they’ve had that wasn’t budgeted for, that is very gratifying. This is the spirit that helps us to pioneer unknown territory.

“I wouldn’t say it’s impossible to predict costs when nobody has done it before,” he adds. “As the journey of each project unfolds, the costs become increasingly predictable and you get early indications whether the initial cost model was totally impractical. In those cases, you can stop, and redo the business case and associated funding approval.”

Has the job been tough at times? “I would say challenging. The hardest time was when I was CTO for two countries at once. It was not a regional or group role, it was two CTO jobs at the same time. Every task was duplicated, but there were still only 24 hours in the day. I was jumping on the plane early morning to be in one country for nine, then flying back at midnight to be in the other at nine,’ says Buliga. “For almost two years I pushed myself to extreme limits of effort for an operating model experiment which was not the best idea.”

What really excites Buliga about telecoms and his role at the moment? “I am excited about the fact that the job is no more just about being a telco – we’re a ‘techco’. At Vodafone we have gone beyond providing connectivity services to technology and digital systems that create new value chains for us and for our customers. We are writing our own software code and adopting technologies way beyond the bounds of connectivity,” he says.

“This is a huge and exciting transformation and it changes the way we work and think. It changes our internal culture and spirit, and it is a highly motivating factor. Technology is now in the driving seat for us.”