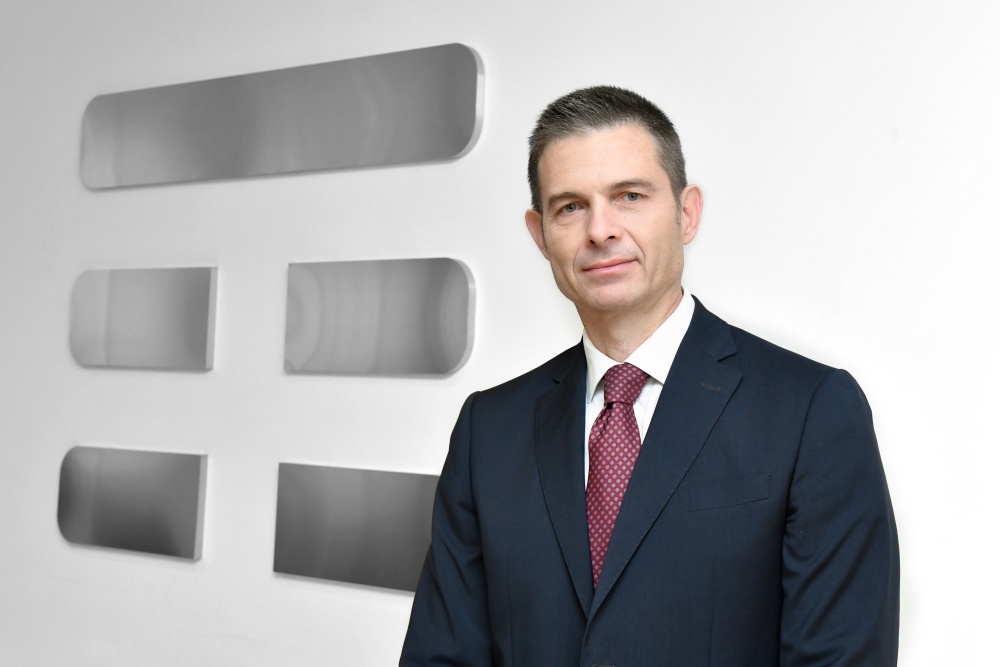 In November 2019, Michele Gamberini was appointed to lead the Chief Technology & Information Office at Italy’s TIM. In this first interview since his appointment, he talked to Annie Turner about the tasks ahead.

Gamberini has worked at TIM in a variety of roles and locations since 1996, including the group’s Greek operating company and most recently as the Head of Network and Service Engineering.

Combining the roles of CIO and CTO is a new move to TIM, and he has no illusions about the scale and scope of his responsibilities. Incumbent European mobile operators face fierce competition and their services have been increasingly commoditised.

As Gamberini notes, there are only four mobile operators for the whole of the US (whose population is roughly equivalent to that of Europe), whereas the 28 countries in the EU typically have four competitors.

Also, as modern life becomes increasingly digital, consumers and enterprises want and expect digital services from their communications service provider too – access to services any time, from anywhere, from any device. One result of this is that data volumes are increasing each year by 60 to 70%.

He says, “We need to move to a simple way of providing connectivity and build new applications and services”. Gamberini stresses that this is not about emulating the so-called over-the-top players, but about building services in and around the network’s capabilities, and making those capabilities available to customers through services that are easy to find, choose, use and change.

He says, “Only by doing this will we get new markets and new business models”.

He adds, “Automation will be key together with the implementation of a new layer able of exposing those capabilities in a flexible way to consumers and enterprises. The challenges are to redesign the business and operational models, and the business proposition.

“On top of that, we have to change the customer journey from wherever it starts, whether that’s a call to a contact centre, or they enter our portal or shops to look at something new or review a subscription– all of this must be digital and must change how they interact with us.

“This requires a complete renewal of the IT and Network and network sub-systems. Data collection and usage, artificial intelligence (AI), full softwarisation and APIs [application program interfaces] are some of the means by which we will get there. It is a tremendous opportunity but to get there, we have to change the way we work.”

Gamberini acknowledges that this is a long journey that will have to be completed step by step. The good news is that the operator is already underway, having designed a blueprint for its digital transformation. It began with the move towards virtualisation, and now the migration from virtualised infrastructure to cloud-native is underway for both network functions and IT.

The original virtualisation efforts, which for operators were built around network functions virtualisation (NFV) did not deliver what was expected in terms of automation and progress was much slower than predicted. He said the architectural stack was too complex to be managed, with automation and orchestration proving to be big stumbling blocks.

Gamberini says this was, in part, due to the big, established vendors struggling to renew their portfolios, or perhaps seeing no value in moving away from their traditional, vertical implementations. They were used to engineering and releasing products in vertical, highly integrated, software and hardware stacks.

Suddenly they were – and are – being asked to move to developing and supporting software products running on generic hardware, relying on open source middleware from the likes of VMware and Red Hat.

According to TIM’s new CTIO, since committing to digitalisation, the operator has, “Refused all attempts to take proprietary stacks,” although this brings new issues. He points out that by “dealing with a unique vendor you are locked in, but at least there is only one interface to integrate and now there are multiple ones and we have to go through all of them and manage them.”

On this thorny matter, Gamberini says open application programming interfaces (APIs) are foundational to the evolution of the entire organisation. The disaggregated approach means his team will have to deal with hundreds, rather than tens, of APIs but this is part of its blueprint to achieve digitalisation through seamless integration from end to end. He also thinks the situation will improve as 5G progresses.

A new generation of vendors

Another consequence of moving away from proprietary stacks is having new actors who have entered the arena, such as Altiostar with its efforts to proceed towards open RAN technology and Affirmed Networks, which offers an interesting virtualised evolved packet core (vEPC) solution and enables operators to deploy a microservice solution on public cloud – for example on AWS – for possible new use cases.

Mavenir claims to be, “the industry's only end-to-end cloud-native network software provider” and has grown rapidly by acquiring small companies with innovative technologies.

Gamberini notes, “Typically, these companies do not have the same solidity as the traditional vendors, and it can be challenging to go with them, but we have started a fruitful collaboration and we are pushing our traditional vendors to work with them too.

“We want the traditional ones to be open – it is a key evolution issue to avoid proprietary technology and to move easily from one vendor to another, according to our needs. Virtualisation was just the first stage, it is not enough. We need to enable higher levels of automation by accelerating the process towards the implementation of cloud-native network and IT solutions. New software products based on microservices will provide a flexible way of self-healing and scaling up network functions or IT applications.”

He says the network functions lifecycle and service assurance need particular attention, as they are fundamental to becoming more operationally agile and being able to support new business models and opportunities.

Like other operators, traditionally TIM sold connectivity and devices, largely through business-to-business and a business-to-consumer (B2B and B2C) models. This too will become more complex, involving B2B2C as well as B2B2B. Again Gamberini stressed the critical importance of open APIs in achieving this.

He gives smart homes as an example, and the challenge involved in integrating such the high number of objects people need to connect to digitalise – automate – the running of their homes. TIM offers a smart box that runs on the Android platform to provide its on-demand TV proposition TIMVISION and “has the capabilities to integrate with a wide portfolio of existing objects in the home environment, hence this a possible model for consumers,” he explains.

The stakes are higher, though in the business market, Gamberini adds. Here it is critical that TIM increases its margins, and he sees as 5G as the key to this: “Network slicing is important, but there are other [attributes] too, such as very low latency and the unprecedented number of devices you can support in a square kilometre, which is a pre-condition for the connected society where millions of individuals, organisations, sensors and terminals will connect to each other, and for new use cases like smart cities or self-driving cars.”

He sees the combination of network slicing and ultralow latency as the real sweet spot as TIM will be able to create multiple slices, each with different quality and service levels to suit the exact needs of different customers and use cases. He expects such services will become commercial in 2021 to 2022, remarking, “We will push hard in this direction”.

Gamberini observes that 5G is not only about a new radio access and some additional components in the core, but about a new, open stack in the RAN, starting in the 3.6 to 3.8GHz spectrum, that runs through the transport network all the way to the core and the service layer.

He stresses, “The radio route is different than for previous mobile generations. We won’t go from rolling out in the biggest cities to the small towns. The radio deployment will be use-case driven and will start with 5G providing fixed wireless access (FWA) in rural areas or high-speed connectivity in industrial districts.

“The way we transport traffic to and from the RAN needs to be flexible and programmable; we need to progress the transport and IP layer all over – from the back-bone to the metro and the access. We have started to renew it this year. It is a revolution that will ensure an E2E SDN [software-defined network] automation from the core to all our long-term central offices and will provide the skeleton of our network for the next 20 years.”

He continued, “Last but not least the core network will have a revolution too”. TIM will start the tender process for a fully cloud-based, new ‘combo-core’ that embraces 5G EPC and 5G new core in 2020.

Like almost all the operators in the world, TIM began with the non-standalone (NSA) architecture for 5G, because that’s how the standardisation, undertaken by 3GPP, has progressed. However, the imminent standalone (SA) deployment model will be particularly important for industry segments, which will need the advanced, specific network and IT capabilities that TIM is working to build and expose to them. This is how TIM expects to add value to customers across many industry verticals, and to monetise 5G.

In July, TIM signed an agreement with Vodafone for RAN sharing, in a move aimed at speeding the deployment of 4G and 5G, as well as avoiding duplicating infrastructure build-out. The companies are waiting for approval from the European Antitrust Commission before they can implement their proposal although TIM is close to closing its RAN tender.

Gamberini comments, “We have common infrastructure and about the same number of sites, so this is a business agreement, where each part provides more or less the same contribution”.

Iliad has also requested to be included in the RAN-sharing scheme and has been agreed in principle, but not yet progressed.

Another aspect is the mooted merger of TIM’s fibre infrastructure with that of OpenFiber, which is owned by Cassa Depositi e Prestiti (CDP), which in turn is owned by the Ministry of Economy and Finance, and energy company Enel.

While these issues work their way through the necessary procedures, Gamberini acknowledges the importance of fibre infrastructure, and its commitment to expanding the amount of fibre quickly. According to the FTTH Council Europe’s figures published in March, with 4% fibre penetration, Italy is twenty-seventh out of the 33 European countries ranked by the Council.

This might seem low, but is still above both Germany and the UK, and of course takes no account of technologies like fibre to the cabinet (FTTC), 4G deployment or cable coverage and their role in national digital infrastructure.

Gamberini confirms that in TIM’s case, it will be looking to the combination of fibre to the home (FTTH), fibre to the premises (FTTP) for businesses and multi-tenancy buildings, plus 4G/5G FWA to provide ultra-broadband.