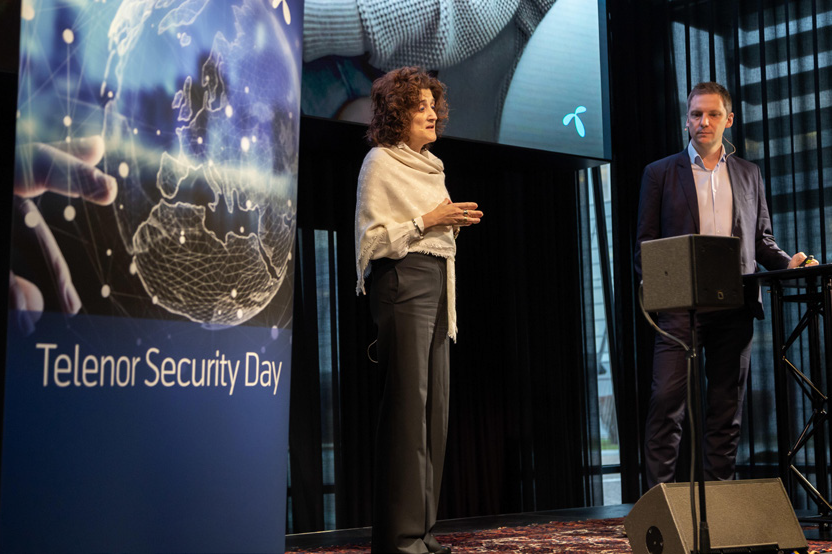 Ruza Sabanovic has gone from launching Montenegro’s first mobile network to shepherding in the 5G era for Telenor group. She speaks to Graeme Neill about the importance of digital transformation, how sales can shape technology and how war shaped her approach to work and life.

The road to becoming a CTO can be a familiar one – plenty of years spent in the trenches of network deployment, whether  at an operator or vendor – but it is rare that sales comes into that journey. But such was the way with Ruza Sabanovic, Telenor Group’s CTO (her precise job title is the more unwieldy EVP and Head of Technologies and Services). She spent the first 12 years of her career with Telenor in her native Montenegro after joining in 1996. In 2007, a year before she moved to Telenor’s headquarters, she headed sales.

She laughs when it is put to her that it was an unusual change in direction from her tech heavy background. Thankfully she had a deal in place that gave her the option to go back to technology after a year in sales. But she adds: “That year was a fantastic learning for me because that was the first time I would look at delivering through the eyes of the customers and users. I was not in the product...I was dealing with real customers.”

Sabanovic has a civil engineering background – her late father was a bridge builder – but shifted into telecoms, initially translating for engineering teams at ProMonte, the Montenegrin operator later taken over by Telenor, but quickly shifting into an infrastructure implementation role. ProMonte launched the country’s first mobile network across a mere 21 sites.

Sabanovic has been Telenor’s Group CTO since late 2015, responsible for network, IT, security and sourcing across Telenor’s global business and around 4,200 staff globally. Operationally, Telenor splits its CTOs into three clusters; one for Europe, one for developed Asia and one for emerging Asia. She says the relationship with the regional CTOs is collaborative rather than top-down; they play a role in setting the agenda of the operator’s technology strategy and it is up to them to execute.

In this time of tests, trials, demos and deployments, Sabanovic says CTOs can also suggest areas they want to explore as well as her team ruling from on high about which market they want to use to explore new technology. She says: “In the majority of cases, we would have [discussions] about where we think is the right market to test a certain solution and then ask how we should do it. Because it’s not straightforward; sometimes it’s the competencies and capabilities that need to be brought to mind to decide who is the right entity, what is the right process and how do we manage that.”

Like other operators, at the forefront of Sabanovic’s multi-faceted technology strategy is digital transformation. She says the goal is to enhance customer experience, and consequently the money Telenor makes from these, through more customised and personalised interactions. As anyone with even a passing knowledge of the telecoms industry would say, this is easier said than done.

She says: “When we talk about digital transformation, technology transformation is going to enable that but we believe this is more than just technology; it’s about the mindset shift. It is about how do we empower and enable new possibilities. On sharing and personalising experiences, building transparency, trust and loyalty among customers and acting as a responsible business with security and privacy by default.”

Even though it is a topic that is a must in seemingly every industry event, Sabanovic argues the telco transition is something that dates back to the first flush of the smartphone market some 10 years ago.  She says: “We have been transforming ourselves from being a closed ecosystem in a telco stack and gradually started opening up. We believe that started with the introduction of the internet, even though we were not that conscious of it 10 years ago but that has created new opportunities in terms of different solutions, different vendors, increased competition.”

As for transformation in 2018, she argues operators undergoing this people-focused mindset shift need to build their employees’ skills within cloud and APIs, data management, or extracting and using data to its full potential, analytics, and security and privacy. The operator has a policy in place where employees are encouraged to spend 40 hours per year on upskilling – Telenor Group CEO Sigve Brekke has been learning about “Growth Mindset” and the much less jargony data analytics, for example.

Sabanovic expresses a degree of frustration with the rate of change; she says making telcos transform at the same speed as digital companies is the one thing she would change to make her job easier. But she admits: “If you had asked me 10 years ago, I would have said the same. It’s a moving target but the pace of change now is rather high.”

The demands on an operator to change swiftly and decisively is something that makes her role “more engaging and fun” but also more challenging. She says: “I would not like to ask for more productivity because then we would not have fun and enjoy the work, but on the other side I do not feel we are sometimes challenged beyond the limits. That forces us to think different and to challenge ourselves to cope with that. It’s a good thing to have it to make sure that we do move fast.

“It boils down to this; we have to be optimistic and believe in everything we do. It’s hard work and we need to be ready to make sacrifices but that’s what it takes to pull through.”

And so a conversation about transformation inevitably tumbles into 5G. Just after we spoke, Telenor launched a family friendly 5G trial, connecting five households to test broadband and television over a test network. Further trials, involving the Coop supermarket chain, the Norwegian Air Ambulance Foundation and Applied Autonomy, will follow ahead of its commercial launch of 5G in 2020. The operator also recently launched a project with Ericsson to transform its network core.

The telecoms industry splits itself broadly between realists and optimists; those excited at the prospects but concerned about promising too much and disappointing on what they ultimately deliver and those looking towards the sunlit uplands of a world revolutionised by 5G.

Sabanovic treads a fine line between both – she would only be drawn on her stance when pushed – but marginally leans towards the former. She says: “We are optimistic for all the technologies that will drive value in everything that we do and that will create value for customers. That’s how we will approach 5G and how we will drive it.

“We are moving from the hype to some concrete launches. It’s a learning journey but we need to stay ahead of the curve so we know what choices and decisions we are going to make for different markets.”

Telenor’s modern day digital transformation strategy is built to underpin its 5G ambitions. Sabanovic says the operator started the journey some two years when it starting moving towards more open, virtualised and cloud-based capabilities. Its Hybrid Cloud platform now handles almost half of its data traffic and around 100 million subscribers worldwide.

For Sabanovic, the opportunity largely lies within the enterprise space, offering customised solutions to both the public and private sector. She says: “We believe that 5G is the key for us to transform and that will drive efficiencies and customer experience. This will also impact the transformation and operating model of not only telcos and digital operators, as we like to call ourselves, but the industry. Because we are basically going to transform other industries as well.

“There are some basic fundamentals to 5G which need to be proved but any generation of technology brings much higher experience and quality with a much more efficient proposition. Fixed wireless access, for example, is just one that is expected not only to improve customer experience and improve the quality of services we are providing, but it will drive significant efficiencies in our delivery model.

“There are also innovation-specific ones that will be driven by the end to end industry value creation. Those are different solutions that are on the borderline of IoT and 5G but these use cases will require higher throughputs or lower latencies, or some like emergency networks or others like the automotive or smart cities, health, those are something we are looking at or testing.”

The enthusiasm around 5G in Europe doesn’t quite match that within Asia or the United States, albeit with some exceptions. Sabanovic doesn’t quite agree with that assessment and argues momentum has been growing across the continent since the beginning of this year. She says: “Europe has traditionally been the leader in telco, but Europe acts when it is the right time to act.”

The Nordic region has long had a reputation for mobile innovation, with Finland launching the world’s first GSM network back in 1991. This appetite has not abated – seven Nordic PMs vowed earlier this year to ensure the right conditions are in place for the parallel deployment of 5G. Telenor is leading the European Union’s VINNI project, which is exploring how 5G will perform using a combination of different technologies such as network slicing and virtualisation.

Sabanovic says the region has always encouraged collaboration and ensured the right conditions are in place to foster innovation and the deployment of new technologies. But she adds this spirit dates much further back than mobile connectivity. She says: “It’s a very Viking, explorative...it’s in their DNA. I truly believe that’s what drives it. This desire to explore is in their DNA. That’s what they have, they’re always striving for more and exploring; not just in their homeland but becoming world famous.”

This resolve and ambition extends to Sabanovic herself. She drily says she’s glad I’m asking the question when I raise her experiences of the Yugoslavia civil war in the early 1990s, when Sabanovic was at university in the early 1990s. She says: “It brought different challenges, different perspectives and different approaches to life. This may be daring but change is just something you have to deal with, right? There is no way back, you need to look forward to wherever you are. You need to find a way to deal. Wherever you are it’s very important that you focus so it’s very clear in your mind what you want and when and how.”

She says the war, and bombing that followed in the late 1990s, helped shape the person she is today. “My life taught me how do you position yourself when you face a challenge, how do you stand up for yourself and fight...It is very strange how difficult it is to talk about how humans can adjust and how we can change without thinking that we can. But we can,” she stresses. “We are much stronger, much more daring and much more focused than we believe we are.”